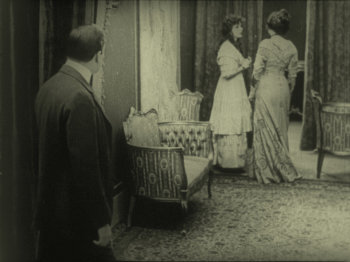 Can it be? Is it really finished? It doesn’t seem possible. The new reconstruction of The Juggernaut is done.

This review will probably be  shorter than you might have thought. I’ve already said pretty much all there is to say about the history of the film in my Juggernauting series, and I don’t have much to add about the adventure it was reconstructing it either. I’m very happy with how it turned out, as I said before. I find The Juggernaut to be a fascinating film — I’ve said that before, too — but I don’t think I’ve ever commented on whether or not it’s a good film.

Let’s put it in a more modern context: it reminds me of Titanic (1997). I went to see Titanic when it came out. Somewhere at around hour 35 of the screening, the person I was there with leaned over and asked me when the boat was going to sink. I think a lot of people were leaning over to their neighbor and asking when the train was going to wreck when they went to see The Juggernaut in 1915. Like the iceberg, audiences knew the wreck was coming. It was all over the advertisements — it’s what the film was sold on, it’s what they were there to see.

It takes a long time to get to the train wreck.

The first reel starts off strong. After a brief introduction to our characters — Mr. and Mrs. Ballard, farmers; their son John (Earle Williams), who dreams of becoming a lawyer; rich railroad magnate James Hardin (Frank Currier) and his ne’er-do-well son Philip 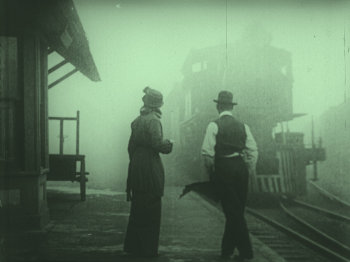 (William R. Dunn) — we get right into some action. On their way to market, the elder Ballards are struck at a railroad crossing and killed. John sells the farm and enrolls in law school, where he meets Philip and becomes his friend, despite blaming his father for his parents’ death. Philip is given to dissipation, and rather than meet John for a study session as planned, he joins a poker game with a gang of sharpers. A fight breaks out when he discovers he’s being cheated. He would be killed by one of them if not for the timely arrival of John, who smashes a chair on the hooligan’s head. End of reel one.

As for reel two… and three… and four… well, we’ll say it doesn’t keep up the momentum. A less charitable viewer might use the word “padding” to describe everything that happens after the fight and before the wreck.

Twenty years later, John is the District Attorney and brings a suit against Philip’s railroad, which has only gotten worse since he’s inherited it. Philip would blackmail John into dropping the case by threatening to reveal the murder, but Louise (also played by Anita Stewart) spoils it all by giving evidence to John that proves it wasn’t him — the sharper got into another fight later that same day and was killed then. The trial proceeds, Philip phones Louise to bring him some documents from his home safe, her car breaks down and she’s force to take… dun-dun-dun… the train. 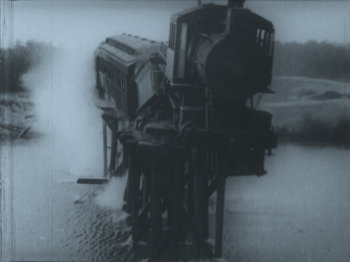 We’re in the fifth reel now and have come to what everyone is waiting for. The train is speeding toward a bridge Philip knows is unsafe to cross, but he doesn’t discover until too late that his daughter is on board. He races out of the office and tries to head-off the train and warn them of the danger ahead, but he’s not fast enough. The bridge collapses and the train goes tumbling into the water.

Then the film forks in a couple directions. John has rushed to the scene as well. At the film’s premiere screening, he swims out to the wreckage and pulls out Louise, but the Juggernaut has claimed its victim — Louise is dead. Others got one of two alternate endings that vary in detail, but both end with Louise recovering and John professing his love to her.

I must say, Anita Stewart gives the only decent performance. Earle Williams’s idea of emoting is to just spike the camera. The intensity of his emotion can be gauged by how long he holds eye contact with you — romantic, pathetic, tensive, it doesn’t matter, spike the camera. Now Julia Swayne Gordon, she is acting. My word, does she chew the scenery. The thing is, I’ve seen Gordon in other films and she’s nowhere near as hammy as she is here, even in her very early work. I’m sure she was directed to act like that. I’m sure even in the final take just as she’s about to devour the set whole, Ralph Ince is just off-camera yelling “BIGGER!” I will give credit where it’s due, the man knew how to block a scene. The scene where John overhears Viola and her mother arguing about Philip in particular, I though that was expertly arranged. He just couldn’t direct actors for beans.

We’ve come down to the rating. The Juggernaut is a fascinating film, and it does deliver the promised full-scale train wreck, and it is thrilling for two or three scenes, but is it a good film? No, not at all. Not one bit. But would I recommend it? The narrative is weak and the acting is horrid, but it’s less a movie than it is a spectacle. Go in with that mindset, don’t trouble yourself with paying too close attention to the middle bits, and you’ll love it as I love it.

I think I’m going to take a few days off, but I’ll give you a hint as to what the next video will be. I needed part of Wanted:- A Nurse (1915) for The Juggernaut and it didn’t make any sense not to go ahead and scan all of it. So that’s waiting on the hard drive for whenever I care to get around to it, but that won’t be the next video out. We released an HD remaster of The Victoria Cross (1912) not too long ago. Coming up next will be another before-he-was-famous Wallace Reid film. One more hint, just as in The Victoria Cross, he also plays a lieutenant in this one.