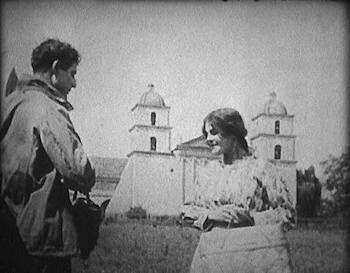 In California, a “religious old mountaineer” (George Periolat) intends that he son (J. Warren Kerrigan) should become a friar. He’s sent to the mission, but before reaching it, he meets a girl (Jessalyn Van Trump) and falls in love. After several days, he decides to abandon the cloth and marry her.

A year passes, and at its end, the son returns home to visit his father. The father, who all the while has thought that his son had entered the priesthood, is surprised to see him. “I heeded the call of love”, he explains. His father rejects him, not angrily but in crushing disappointment. The son calls his wife over. At the sight of her and of the newborn child she carries, the father yields and embraces them both.

The announcement for Man’s Calling in the trade magazine Moving Picture World somewhat grandiloquently calls it a drama “dealing with the psychology of the soul”. That doesn’t actually say much about what the film might be, but it does suggest what it isn’t. One reel dramas can often feel more or less rushed because they try to maintain a sense of constant action and try to cover too much material than they can do justice, but Man’s Calling keeps the plot remarkably simple and staid, and in doing so, it really gives itself some room to breathe and allows the cast to act with deliberation and conviction. Regardless of whether it succeeds in revealing the “psychology of the soul”, it does manage to use its thirteen minutes to establish believable characters that appear to act with real emotion.