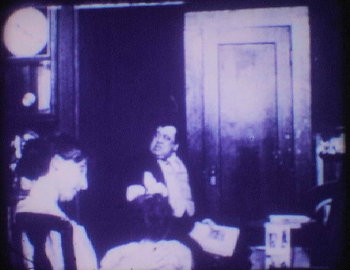 It’s never a good sign when you’re uncertain whether a film is meant to be a comedy, but I’m assured that’s what this is.

Martha (Flora Finch) notices the clock has stopped and tells her husband Bingles (James Lackaye) to have it repaired. The clockmaker says it will cost five dollars. Outrageous, Bingles exclaims. He’ll fix it himself.

He shoos his wife and children out of the living room so he can work on the clock in peace, but then finds he’s out of machine oil. He heads to the hardware store for some lubricant, but on the road meets some friends (one of them is Harry T. Morey) and decides to get some lubricant for himself. Back at home, drunk as a skunk, he picks a fight with Martha and beats his children.

“There, I’ve saved five dollars!” Bingles cries, throwing open the door — but there’s no one there to hear. Martha’s note says it all: “You have been drinking. I am going to mother’s never to return. It will be useless to follow.” Bingles looks up to see the clock’s hands spinning backwards.

Moving Picture World’s review said Bingles Mends the Clock was “a dull offering” “in poor taste” with “very little laughter”, and I have to agree. This was an all-around bad idea for a film.

You know what I do like? The Women Film Pioneers Project. As a film collector, you get pretty jaded. There was a bit in one of the Metropolis documentaries about the difficulty those that discovered the complete film in Argentina had of getting the Murnau-Stiftung to acknowledge them, but as any collector would tell you, that’s par for the course. If a film is proclaimed lost, then it is, now and forever. Should you have a copy of it, expect to be ignored, and if you should have the fortune of someone listening to you and even watching it, you might perhaps garner a few comments, but then the film will continue to be lost — even to those that just saw it. It gets to the point that you don’t even bother anymore. It’s so refreshing to find people who actually care, and the WFPP does. I think all the Flora Finch films they have marked “PC” (private collection) are mine.