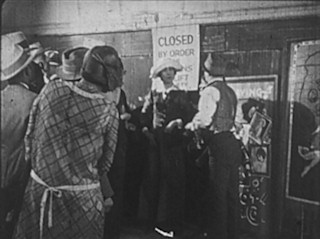 Flora Finch is most known for playing opposite John Bunny as his shrewish wife in the numerous “Bunnyfinches” the two made for Vitagraph in the early 1910s. When Bunny unexpectedly died in 1915, she attempted to continue the act solo. It didn’t really work out. Going from the height of stardom in the ’10s, her career sunk lower and lower until, by the end of her life, she was reduced to doing extra work.

In ‘Morning, Judge, Finch plays Crabbine Hicks, president of the Women’s Uplift Society. To give an idea of her moral conviction, she once organized a movement “to prevent saw mills from selling undressed lumber”. The local theatre is playing a saucy can-can dance routine, which Crabbine successfully sues to shutdown.

Peggy Pierce (Peggy Shaw) is among the now out of work chorus girls. The coat boy at the theatre is Crabbine’s son, Buster (James Terbell). Buster is rather taken with Peggy, and as she has nowhere to go, Buster suggests that she and the other girls come over to his house. Mother is out all day with the society, and Dad (Joseph Burke) isn’t the sort to care.

Crabbine and the other society members are at the train station when one of them realizes they’ve left the treasury back at Crabbine’s house. The group discusses for a moment before deciding to go get it. They’re overheard by Naughty Nick, a “large bandit at large” who’s “in the country for his health, after too much night work in the financial district”. Nick also decides to pay the Hicks house a visit.

‘Morning, Judge is not a good film – not at all. It’s unfocused, unfunny, the plot just meanders from one scene to the next, and the “resolution”, if you can even call it that, is infuriating:

The chorus girls? Naughty Nick? Buster and Dad? No time for them when you’ve got a killer sight gag like that to go out on. Rarely has a film – and a comedy film, no less – angered me so much as ‘Morning, Judge. It’s only February, but I think I’ve already seen my worst film of the year.