Wait a minute, you might be saying — I’ve already done a review of Station Content. Yes, I have, and I won’t be reviewing it again. This will be more of a textual reconstruction. The original, feature-length release of Station Content, as I’ve said before, is presumed to be lost. What survives is a roughly one-reel abridgment. So what is missing from the story? Not a lot, really. Station Content seems to have been a film that lent itself well to abridgment:

Kitty (Gloria Swanson) was originally from a large city (an eastern city, likely New York, but contemporary reviews are contradictory). She marries Jim Manning (Lee Hill), who’s the master of Cybar Station. Cybar is a remote, isolate place somewhere in the southwest. She’s too preoccupied to be culture shocked — she’s about to have a baby. The baby takes ill shortly after its birth and dies before the doctor arrives. Kitty is sure the baby would have lived if they weren’t so far out in the country.

Jim had promised her that he would soon be promoted to a more urban station, but months have passed and no promotion has materialized. Kitty’s resentment grows with each passing day. Her only friend is the conductor of the express that stops at the station. A train wreck ahead delays the express one day. Kitty and the conductor spend the time at the piano, where Kitty sings songs that remind her of happier days before she’d ever heard of Cybar. Aboard the delayed train was a theatrical manager (Ward Caulfield) who overhears Kitty singing and is impressed. He tells her that he’s casting a musical revue (or maybe an operetta — again, reviews are contradictory) and she’s got a place in it if she wants it. Kitty tries to discuss the matter with Jim, but he shoos her away, saying he’s too busy. That night he finds a letter on the table: Kitty has left him.

Some time later, Stephen Morton (Arthur Millett) attends Kitty’s show. After the curtain call, she finds him waiting for her backstage, come to ask her out to dinner. Morton is the president of the Pacific Railroad — Jim’s boss. Morton is also married, but he and his wife (Nellie Allen) are estranged. To quote one review, he proposes that Kitty might “fill the void”. Kitty is reluctant. No need to answer now — he’ll be at his ranch in San Francisco, he says. If Kitty decides in his favor, she need only knock at the door.

Kitty is tempted — very tempted — and goes so far as to book passage to San Francisco, but her train is delayed and she misses her connection at Lone Bridge. The station might as well be Cybar for how isolated it is, but the family there seem quite content with their lot (Fay McKenzie is the baby, I don’t know who the parents are). The husband, however, is ill from overwork. In the morning, the train to San Francisco pulls out of the station, but Kitty isn’t on it. She knows Morse code and has volunteered to take over for a few days so that he can recuperate.

Jim, meanwhile, has at last got his promotion — too late for it to make any difference. He boards the train for his new job in San Francisco. Also on the train is Stephen Morton on the way to his ranch. A great storm breaks out that night. The track-walker rushes to Lone Bridge Station with news that the bridge has been struck by lightning and destroyed. He tells them to telegraph Victorville to stop the train, but the train — Jim and Morton’s train — has already left. Kitty pleads with him to go out, cross the canyon, and warn the train, but he refuses — it would be certain death in this storm, he says. Kitty takes it on herself to do so. 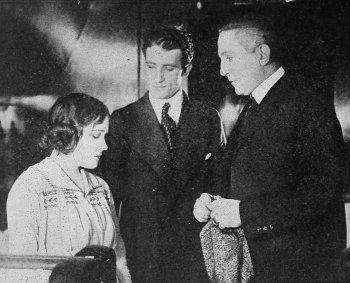 Braving all the dangers, Kitty at last makes it across the canyon and flags down the train in time before collapsing from exhaustion. She’s carried on board. When she wakes, Jim is the first man she sees. She asks forgiveness, but Jim insists there’s nothing to forgive — the fault was his for ignoring her. Morton, realizing that he has his answer, feigns ignorance and Jim never knows what might have happened if Kitty hadn’t missed her connection.

Really, aside the opening sequence with the death of Kitty’s baby and Jim’s failed promise of promotion, the abridgment conveys the entire story at a fifth of the length of the original. Even the adultery subplot, which it never directly mentions, is pretty heavily implied, despite the addition of the “I know a director in California” business. The most curious change is shifting the Lone Bridge illness from the husband to the sister-in-law, although that does provide an easier and quicker excuse for why he disappears from the film.

There are a number of contemporary reviews, all favorable. Several report that the working title of the film was The Prodigal Wife and that it better suited the story than Station Content, but curiously, the review in Variety says it went the other way: that the working title was Station Content, but it was released as The Prodigal Wife. I would say the majority opinion is probably right, but the Variety review is very detailed in its plot summary, and at least for the footage that survives, it’s more accurate than any of the others. It’s obvious that the reviewer actually saw the film, which may seem like an odd thing to say, but many reviewers didn’t — they just went off the publicity information provided by the studios. So who knows?

Another big question is Diana Carrillo. Carrillo played a Native American woman. It’s a big enough role to make the cast list (the couple Kitty meets at the other station seem like major characters and they don’t make it), but not a single review mentions her and I don’t have any idea where she fits into the story. She’s briefly visible at the start of the abridgment, sitting in front of the station weaving a basket. She’s also featured on one of the film’s lobby cards doing the same.

Posted on August 8, 2017, in Off topic and tagged 1918, Arthur Hoyt, Gloria Swanson, Triangle. Bookmark the permalink. Leave a comment.