When you think of Italian cinema in the silent era, you think of historical epics on a grand scale like Cabiria or Quo Vadis?, but of course that wasn’t all they did. The Italians also released much less lavish productions dealing with modern themes, including short slapstick comedies like this one.

Our star is Ferdinand Guillaume. Guillaume was a lithe and acrobatic Frenchman who came from a circus family, which no doubt had a great influence on his work as an actor. When he was with the Cines company, he was better known by the stage name Tontolini, but at Pasquali, he was Polidor. Guillaume featured in hundreds of movies, starting in the 1910s and continuing well into the ’60s in films like Fellini’s La Dolce Vita.

Polidor Has Stolen a Goose is a rather high-concept picture — after you’ve read the title, you’ve got a pretty solid idea of the plot. A young lady has sat her goose down by the side of the road to canoodle with a young man. Polidor comes

by and swaps his laundry bag for the bird. The real trouble comes when he absconds into the city and is caught up in a wedding party. It’s quite a challenge for Polidor to keep it together at the banquet table with a live goose under his shirt. After some mildly comic antics, Polidor is chased from the house with the bird on his back. The goose takes flight and Polidor finds himself clinging to a streetlamp at the end of the film.

I have to say that Goose has a stronger ending than the only other Polidor film I’ve seen — Polidor’s First Duel — but I’m not sure if that’s enough to recommend it. Guillaume is sometimes compared to Chaplin, and from his physical performance I can see why, but this is weaker than even the most minor Chaplin title. I imagine that given the right subject mater Guillaume could impress, but the material he’s got to work with here is just not very good at all.

Mabel (Mary Alden) invites her cousin May (Blanche Sweet) to a house party. May is a shy country girl and a weekend in the big city with her flashy cousin is an exciting prospect.

It’s love at first sight for Lieutenant Deering (Wallace Reid) when May steps out of the car. Captain Stiles (R.A. Walsh) has a baser attraction to the naïve girl. All the guests, save Deering, sit down for a game of cards. It isn’t until Mabel presents May with a $250 bill that she realizes they were gambling. “Why, I didn’t know it was for money!” she exclaims.

Stiles, “the wealthy roue”, sees his chance. He offers to loan May the money, which she’s in no position to reject. Deering, watching from another room, sees Stiles hand 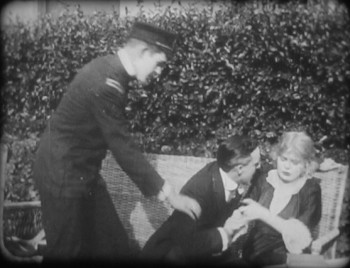 May a check and assumes that she must have been the winner. I think he disapproves? Maybe? Since he sat out the game, it would make sense that he didn’t care for gamblers, but the film doesn’t make this clear and the situation is diffused immediately when Deering confronts Stiles and learns that he loaned May $250.

Of course, the Captain’s loan did not come without an expectation of repayment. The next day, when May is out walking her dog, Stiles corners her and tries to force a kiss. Deering intercedes. Stiles, his money not having bought him what he wanted, demands a refund. Deering talks to Mabel, who agrees to forgive May’s debt. Deering takes the check back to Stiles and tears it up in front of him.

The party ends and everyone departs. Later, “the country mouse” back “in her home nest”, is visited by Lieutenant Deering. Her father leaves them to make moon eyes at each other, safely chaperoned by the dog. 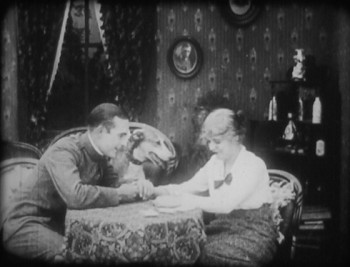 I feel my summary doesn’t adequately reflect the experience of watching The Little Country Mouse (1914). This is a film that exists almost entirely by inference. It isn’t like The Secret of the Palm — the story isn’t incomprehensible; it’s that there really isn’t any story. If I were to summarize what actually happens on screen, it would be: a girl goes to a party, loses a card game, then goes home. Everything else is left for the audience to deduce from vague clues and from knowing how these sort of stories usually go.

I wouldn’t say it’s a bad film. In an odd way, I actually kind of liked it. It’s the sort of film that requires the active participation of the viewer, and in a very literal way, it’s only as good or bad as you imagine it to be.