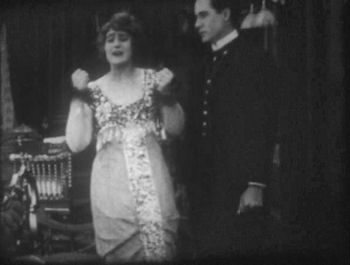 It’s time to close out my little series of Crystal reviews with the film I’ve saved for last. If The Hallroom Girls (1913) was the best comedy, The Ring (1914) was surely the best drama. But whereas Hallroom really only stood out in comparison to its very weak competitors, I thought Ring was a decent short drama taken on its own merits.

The opening scene cuts back and forth between Mrs. Gray (Pearl White) throwing a lavish party, being attended by liveried servants, and wearing a dress dripping with pearls; and her husband, Arnold Gray (Chester Barnett), who sits in his office looking worried, eagerly awaiting but simultaneously dreading the arrival of some important business correspondence. At last it arrives, and the news isn’t good: the Grays are bankrupt.

“After the catastrophe”, we find Pearl and Arnie at breakfast in a simple, cheaply furnished room, where Pearl has to clear away the dishes herself. Before Arnie leaves to go to his new clerical job, he kisses his wife, but she seems cold and distant.

Arnie’s boss is Alfred Norman, a snide-faced man who wears a top hat and white gloves and a mustache that I kept waiting for him to twirl. Alf doesn’t stay at the office long, though. He leaves to attend a party at Mrs. Allen’s. 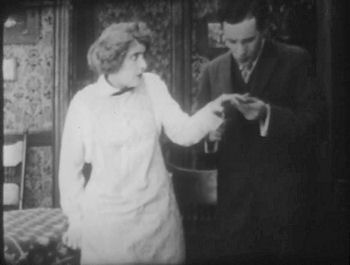 Mrs. Allen is one of Pearl’s friends from the old days, and distressed conditions or no, Pearl is still welcome at her functions. In fact, she’s already at the party when Alf arrives. They meet and he’s taken by her at once, and she’s not a little taken by him as well. Back at home with Arnie at the end of the day, Pearl seems even more aloof.

Some time later, Alf sends a gift to Pearl — a diamond ring.

A note about the cinematography: The intercutting of the first scene is nicely handled, but after that, the filmmaking technique settles into an adequate but unremarkable style. Except this scene. Here, we intercut between Arnie toiling at his desk and Alf in his private office with the ring — a sort of reverse cut, suggesting that they sit on either side of a frosted glass wall. But it’s very, very obvious that it’s the exact same backdrop and they’ve just swapped the furniture around. We cut from Arnie to Alf several times and it’s never not distracting.

Anyway, the diamond ring. Pearl tries it on and instantly adores it, but when she reads the notes and sees the name of the sender, she knows she can’t accept the gift. She’s still wearing it when Arnie returns home. Startled, she says the first thing that comes to mind: “I found this ring”. You’re not fooling anyone, Pearl.

The next day, while Arnie is at work, Pearl takes the ring to Mrs. Allen, who she hopes will act as an intercessor between herself and Alf — Pearl determined not to see him again. Coincidentally, I suppose, Alf leaves the office to call on Mrs. Allen as well. Arnie, suspicious, trails him.

Pearl flees into the back room as Alf enters. Arnie appears moments later, sees Pearl’s hat on the sofa, and becomes enraged. He pulls out a gun, a struggle ensues, the gun goes off, Pearl — standing just on the other side of the door — is hit.

Mrs. Allen breaks up the fight. Alf runs off. Arnie goes to Pearl, but it’s clear enough that he’s assumed the worst and is through with her. As he’s about to leave, Mrs. Allen shows him the note Pearl had asked her to give Alf. “I am a married woman”, it reads. “I cannot … accept your gift.” Arnie, realizing the mistake he made, returns to Pearl, who accepts him back.

I really liked this film. It plays at just the right pace and doesn’t show anything more or less than it needs to. It gets a little bit silly with Arnie clinging to the back of Alf’s car and the clichéd gun-going-off-in-a-struggle, but the story on the whole was well done. It successfully gets the audience to side with the husband at the start, and since we identify with him, we’re taken along the same mistaken journey he is — but it does so without having to reduce Pearl to an outright villain, which would have made the reversal at the end much less believable and would have sapped away the impact of Arnie’s almost leaving her.

Moving Picture World’s review praised White’s performance, and I would concur both with that and with their implicitly saying the other performances weren’t particularly praiseworthy. Barnett is acceptable, but he plays it broad. The Alfred Norman character, as I’ve already suggested, is one mustache-twirl away from being a full-on parody of a lecherous fat cat. The other characters are so minor, it hardly matters how they act.

But still, questionable acting and one poorly constructed scene aside, I really enjoyed this film.

Posted on June 9, 2015, in Like it, Reviews and tagged 1914, Chester Barnett, Crystal, Pearl White, Phillips Smalley. Bookmark the permalink. Leave a comment.