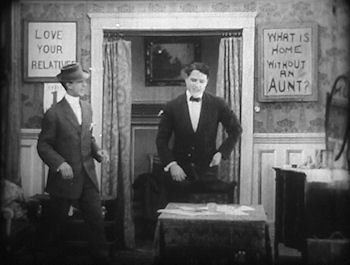 A true chamber drama, in the sense that it takes place entirely on a single set with a principle cast of just two players. Further, the whole film appears to have been done in one continuous take (there are actually a few cuts, but most are masked by title cards and the one that isn’t is so seamless that I had to step over it frame-by-frame to find it).

Percy Pigeon (J. Warren Kerrigan) arrives home to find a “Kick Me” sign on his back — it’s April Fool’s day, the calendar reveals. He’s expecting his aunt to visit later and, as he hopes to be well remembered in her will, he wants to make a good impression. This involves replacing the artwork on the walls with signs reading “Love Your Relatives” and “What is Home Without an Aunt?”

Bobby, Percy’s friend, appears and asks to borrow his apartment to meet his fiancée. Percy agrees. Bobby writes to Dolly to come at once and they’ll be married right away, then leaves to get dressed. Once he’s gone, Percy decides to play a joke of his own. He takes Bobby’s letter and readdresses it to Bridget O’Rafferty, their washerwoman. Later, when Bobby is waiting in the apartment alone, Bridget shows up ready to get hitched and isn’t eager to take ‘no’ for an answer.

After Bridget’s exit (pushed out the window), Bobby notices the letter from Percy’s aunt on the table and, returning tit for tat, takes a dress and wig from the closet (why does Percy have these?) and impersonates her. Percy is surprised. It seems like there should be more to the ending, but the original end card is intact on my print and it runs all of its advertised 420 feet, so I don’t think anything is missing. It just very abruptly stops with Percy on the floor searching for a dropped ring (?) while Bobby as Auntie stands over him.

Technically speaking, this is not an advanced film (aside from that impressively concealed cut while Bobby is fiddling with the latch on the trunk), but even if the technique wasn’t pioneering, the story is well enough presented. “It fulfills its purpose”, to quote Moving Picture World. They didn’t seem to care for it much. While all the other films got a paragraph synopsis, The Borrowed Flat has just “A comedy presenting what happened in a borrowed flat”. I wouldn’t be so dismissive, though. I personally found it entertaining.

Posted on March 1, 2015, in Like it, Reviews and tagged 1911, Allan Dwan, American, J. Warren Kerrigan. Bookmark the permalink. Leave a comment.