When she’s co-starring alongside John Bunny, Flora Finch plays fairly grounded characters — generally the shrewish wife — but when she’s with other actors or flying solo, things can get pretty weird. An Unsusual Honeymoon is an intensely weird little film.

Newlyweds Mary (Flora Finch) and Tammas (Charlie Edwards) are on their honeymoon at the fair. From the numerous kilts and bagpipes (both of which Tammas sports), I can only assume we’re in Scotland. The two take in all the sights, including the wine tasting tent, where they get plastered. There’s a gas balloon tethered on the fairgrounds that Mary finds intriguing, climbing into the gondola to get a better look. Tammas follows her lead, and because he “desires adventure”, he cuts the tether. The couple sail away into the air.

Over a South Sea island, the balloon develops a leak for plot reasons and crashes to the ground. The natives look something like a cross between Zulus and Vikings. They swarm Mary and Tammas, but back away in terror as the latter begins playing on the pipes.

“They think we are gods”, Tammas says, his bagpipes in hand and his foot planted on the back of one of the prostrate Zukings. Not exactly — they actually think it’s the bagpipes that are enchanted. The King, frustrated that his subjects no longer heed his music (he’s got two great femurs that he swings around), decides to steal the pipes while the newlyweds sleep.

Without the protection of the enchanted bagpipes, Mary and Tammas are at the mercy of the increasingly hostile Zukings. They escape by throwing snuff into the air, which causes the natives to sneeze uncontrollably. They reach the shore and are picked up by a patrol boat, where their adventure ends.

This may be an unusual comparison, but this short reminded me of a late-series episode of The Simpsons, in that even if nothing else can be said in its favor, watching it is always a surprise because you can never tell where the plot is going. It isn’t totally random — it does operate on a certain logic — but at any moment, the slightest little thing could segue the setting and action into something totally unexpected. I had no idea what was going to happen next in An Unsusual Honeymoon and it was entertaining to watch unfold.

Written by Rose Tapley, who evidently was also an extra in the film, but I failed to spot her.

A Race for a Kiss (Hepworth, 1904)
Directed by Lewin Fitzhamon
Starring Dolly Lupone

I recently watched a bunch of early Hepworth comedies. None of them being more than a few hundred feet long, you can get through a fair number in an hour’s time. Some were good, some were staggeringly bad, but by far and away the best I saw was A Race for a Kiss (1904).

A man riding a horse and a man driving a car are both vying for the same woman (Dolly Lupone). To avert a fight when the two meet, the woman proposes a race — the winner to receive a kiss. They speed down the road, with the man in the car leading at times, the man on the horse at others, and finally they’re neck and neck. Then a policeman pulls the motorist over for speeding and the horseman wins by default.

It’s a single joke film, like most of them are, but it stretches out the setup long enough that you appreciate the punch-line when it arrives, and further, it has the good sense to end after the joke is told. It might seem like the obvious way to structure a joke film, but it’s one many of the others failed to figure out. 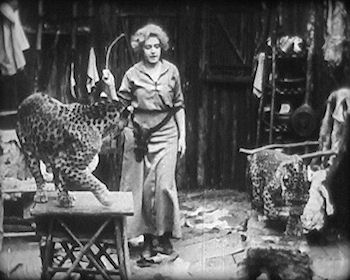 Another splendid jungle adventure from our old pal Colonel Selig.

Charles Clancy (Earle Foxe), a representative of the Great American Circus, is in Africa trapping exotic animals — mostly large cats, but also a zebra, a rhino, and an elephant. He meets John Gladding (Fred Hearn), a trader who lives in the jungle with his daughter Kate (Vivian Reed). John is sick with the plague. Charles offers to stay with them, but John insists that his daughter will see him through.

The very instant that Charles leaves, John dies. The native servants, evidently frightened by the plague (and I don’t see why they shouldn’t be), refuse to stay in the cabin and all but one flee. Kate is left alone with Wamba (Walter Beckwith). She sends him out with a message to Charles.

The very instant that Wamba leaves, a lion pounces on him and he’s killed. Unlike in The Last Man (1924), where the menacing puma was just a dummy, a very real lion jumps on the stunt man here and falls on top of him when they hit the ground. This is happening literally steps from the door, but Kate doesn’t seem to hear it. She’s in the cabin with a couple of tame leopards. She’s holding a stick and doing some kind of circus act with them while her father’s corpse is presumably in the corner of the room… you know, this is a really weird scene. Anyway, she evidently decides that she needs some air.

The very instant that Kate leaves, a growling tiger rushes for her. She runs back inside. The tiger paces in front of the door. She reaches for the pistol at her hip, but that won’t do. She instead takes an elephant gun from the wall and loads a cartridge. She shoots through the window, but I guess she was aiming at the lion? I don’t know, but the tiger doesn’t care and I guess she doesn’t have any more bullets. She opens the door and commands the leopards to attack… and they do. They kill the tiger (or rather, they roll around with a tiger puppet for a while) and Kate calls them back inside.

A year passes. Charles is back in the jungle, or maybe he never left, but at any rate he finds the sun-bleached skeleton of Wamba, and on that faithful lost messenger, he finds Kate’s cry for help. He rushes to the cabin but it’s not so much a rescue as Kate and her leopards seem to be perfectly fine. Back at the boat (there’s a boat evidently), someone named Tom writes to Charles that they’re ready to leave and he’d better come aboard. Charles writes back that he’s staying with his new wife.

The story is nutty and I love it. I expected that, but what I wasn’t expecting was how well shot the film is. It looks much, much better than it has any right to, with some creative framing, well-timed cuts, and appropriate reaction inserts. I think that the legitimately good cinematography coupled with the supremely kitschy storyline really elevates the film to something special. It’s different from The Last Man, which really only works on a so bad it’s good level. This is an unusual but entertaining mix of good-bad meets good-good.